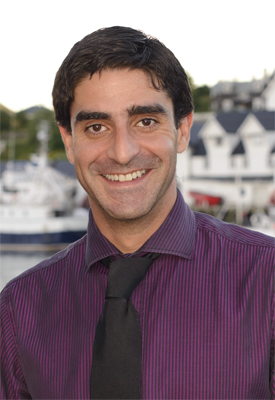 Frederico was born in Uruguay but has lived in Spain for the last twelve years, in Barcelona, Coruna (north-west Spain) and then in Tenerife where he moved to find work in the tourist sector and because of the climate. He worked at a few odd jobs in Spain for a temping company, but he trained for three years as a waiter, which is his real job. He has now been waiting at the Maren Anna restaurant/bar for the second year running.

Rando-Lofoten: How did you end up here in the Lofoten Islands?

Frederico: In fact, I had never thought of coming to Norway. Sometimes I used to think about leaving Spain, but I thought about Great Britain or Germany where I knew there were good opportunities to find work, but I don’t speak German… The reason I’m here today is that I met Trond, one of the bosses at Maren Anna. He was on holiday with Sarah  in Tenerife in October 2011. They saw me working on the evening my workmate failed to turn up for the shift. I had to do the work of two people and must have moved around a bit faster than usual and I think they were impressed.

Sarah and Trond talked the matter over. They made me an offer but thought I wouldn’t accept - asking me to come and work in the Lofoten Islands - thinking that my employer must be proud of me and that I had good working conditions. But it was quite the opposite, I was working part time, I was exploited, and I was still owed the last month and a half’s salary. I asked them to wait until the end of my shift while they had a drink. We then discussed all the necessary details for coming to the Lofoten Islands and that’s how I got here.

R-L: What was your first impression when you arrived?

F: I arrived for the first time in March to work for two months in the fishing industry before beginning my season as a waiter at Maren Anna. It was still snowing and it was the first time I saw snow falling, it was an entirely new experience, the landscapes are nothing like those in Spain. Of course we have mountains in Spain too, but they are very different, here everywhere is so green. I haven’t yet had the chance to explore the countryside because I work long hours and I use my few days off to sleep and rest. I can’t wear myself out in the mountains and be on form for work. One of the reasons I like working here is that the restaurant owners look after me, a bit like as if they were my family.

R-L: Is it easy to make contact with the locals in the Lofoten Islands?

F: Whenever I’ve been invited anywhere, to a birthday party or barbecue for example, I’ve always had a positive impression of the people living here. At the bar, on the other hand, when I’m not working it’s quite difficult to have any contact because the Norwegians speak Norwegian together and I don’t understand a single word.

R-L: What’s the biggest difference for you between Europe - particularly southern Europe -and Norway?

F: Definitely the behaviour. It’s so strange, the society is different. I realised that for a lot of Norwegians it is difficult to communicate, particularly like we do in the south. Let me give you an example: when they are in the bar they don’t talk much to begin with, they often need a few drinks to loosen their tongues. They are probably shy. On the other hand, you can leave your smartphone on the table, the keys in your car with the doors open and nobody will steal anything. In the supermarket  too, women leave their handbags in the trolley and walk over to the other side of the shop. If you did that in Spain you could be certain your bag would no longer be in the trolley by the time you got back! It’s really something we should learn from the Norwegian way of life: honesty. That’s what I think anyway.