Until May on the top 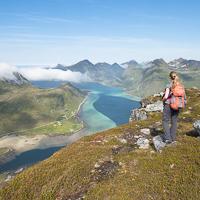 This small summit is near the E10 road. Very few people come here as there is no trail and the base is covered with a dense birch forest. If, however, you take the time to make your way through the undergrowth following the south-east ridge of the mountain you can easily reach the summit. The viewpoints over the turquoise bay of Flakstadpollen to the north and Lake Storvatnet to the south are breathtaking.

Don’t waste time looking for the start of the trail to the summit because, at the time of writing this guide, there isn’t one. Even though there isn’t a trail there are several ways of reaching the summit, some of which are safer than others. We have chosen to follow the south-east ridge of the mountain from the small car park to the right of the road roughly 950 m after the junction of the E10 and the road to Nusfjord. You head off through the undergrowth along the edge of the road following a north-west bearing at the start. At around 200m altitude you leave the undergrowth and reach a shrub zone that gradually becomes short grassland. You can then see where you are going: look out for a small trail that appears at this level of the mountain and continues to the summit (if you don’t lose it on the way). The simplest and safest way is to follow the ridge to the summit. Even though there are a few steep sections before you reach the plateau at the summit, the view over the bay of Flakstadpollen is magnificent.

It’s possible to carry onto the pass that overlooks Lake Svartvatnet by walking down along the west ridge of Kollfjelet towards Nonstinden (see GPS route below) and coming back via the south slope of Kollfjelet mountain. If you opt for this route bear in mind that the route after the pass, and until you reach the south-east slope of Kollfjelet, is not easy because, in addition to the fact that there is no trail, the slope is very steep.

The simplest way is therefore to go back to the car park from the summit the same way as you came. 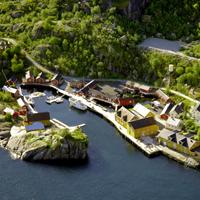 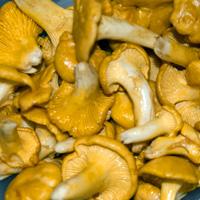 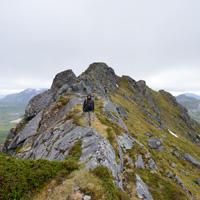 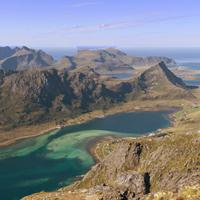